Posted on August 22, 2011 by funeralOne under News
Leave a comment 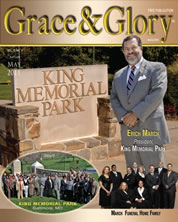 In the pages of the May, 2011 issue of Grace & Glory magazine, you’ll find an interview with Erich March, is Many of you may not know that, as a young man, Erich thought of entering law school. But, as the March family business grew, he chose to enter funeral service – and he’s never regretted the decision. “My goal was always to help people and I found that helping people when they were hurting the most as a funeral director was a very fulfilling career.”

Today he is the President of King Memorial Park, and has unique insight into the early days of the cemetery. “Thirty-eight years ago, King Memorial Park was started as a rough little twenty acre cemetery in the Baltimore County countryside by four funeral directors from the city.”

That “rough little twenty acre cemetery” has been transformed by loving care and the forward-thinking of the March family. It is now an expansive 155 acres, featuring some of the most beautiful rolling hills, manicured lawns and gardens, chapel mausoleums and cremation niches.

Are you aware that King Park is the final resting place of some of Baltimore’s most notable legends, “The Mother Teresa of Baltimore”, Bea Gaddy, Hall of Famer and Baltimore Colt Jim Parker, comedian and television personality, Slappy White and businessman and philanthropist Harlow Fullwood? Erich makes a solemn promise to the community when he declares, “Their legacy as well as the heritage of every family at King Park will be forever preserved with dignity.”

We invite you to download the PDF to read the full interview with Erich. And, naturally, we’d love to have you come to the website to see the beauty of the cemetery for yourself – or better yet, stop by!