Posted on January 19, 2017 by funeralOne under News
Leave a comment

The March Family is humbled and honored to share their path to 60 years of service. 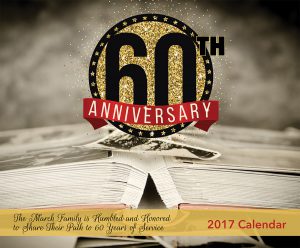 One hopeful day on January 2, 1957, William Carrington March and his wife, Julia Roberta March, embarked upon a new business venture that would profoundly change their lives. Motivated by faith, determination, and the desire to provide financial security and educational opportunities for their young family, William and Roberta opened a small funeral parlor on the main floor of their three-story rowhome. Thus began the family and business odessey of March Funeral Homes. Success was not immediate. In their first year of business, the funeral home conducted a total of two services. The following year there were four. Even in the face of immediate challenges, the young couple would not be deterred from their dreams. During this time, William and Roberta were also blessed with their fourth child.

The goal of providing their children with educational opportunities they never had was the driving force that caused them to work over 100-hours per week. William worked nights in the post office, and he and Roberta worked days in the funeral home. His business mind and her compassionate heart combined to form a funeral establishment that turned no one away. They knew firsthand the plight of the poor. Everyone received a dignified service regardless of his or her financial condition. Thus establishing the beginning of what would become the March Legacy.